Police have arrested four teenagers over a terrifying crime spree through Lake Macquarie.

It began just before 5.30 yesterday morning when a Nissan Navara was stolen from a driveway on Myall Road at Cardiff.

It’s alleged the utility was used to tear up the turf on a sports field on John Fisher Drive at Belmont before hitting a parked car on Beach Street at Belmont South.

Officers then spotted the vehicle and gave chase along the Pacific Highway with speeds reaching 140 kilometres per hour in a 90 zone on the Newcastle Inner City Bypass, with reports the vehcile was weaving in and out of traffic and swervibg onto the wrong side of the road.

The ute hit another car on Lookout Road at New Lambton before it was abandoned on McCaffery Drive at Rankin Park.

No one was injured.

The 18-year-old man was charged with 10 offences, including:


He was granted strict conditional bail and is due to appear before Belmont
Local Court on Wednesday 28 March 2018.

The 17-year-old boy was charged with be carried in conveyance taken without
consent of owner. He was granted strict conditional bail to appear before a
children’s court on Monday 26 March 2018.

The two girls will be dealt with under the Youth Offenders Act. 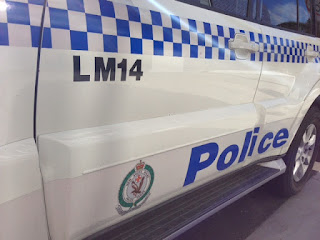